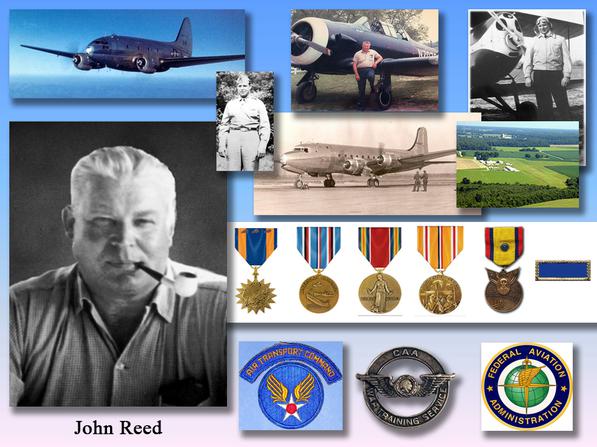 John Reed
Flight Instructor, FAA Pilot Examiner , Laurel Airport Manager, 35,000 Flight Hours
John Reed John Reed learned to fly at the Salisbury Airport (later known as Delmarva Airport) in 1939, and received his flight instructor certificate in 1940.
When the United States entered World War II, he was a contract flight instructor in the Civilian Pilot training program in Lawrenceville, Virginia. Upon enlisting in the Army Air Corps he was assigned as a flight instructor until 1944 when he transferred to the Air Transport Command. In February 1945, he ferried an aircraft to India and flew the hump as an instructor pilot on C-46’s and C-54’s until November 1945.
In 1946 John was a flight instructor at the Laurel Airport in Laurel Delaware. He became a designated pilot examiner in 1947 where he gave thousands of flight tests and operated one of the busiest flight schools in Delaware. Students came from over 100 miles away because of his reputation.
When the owner of Laurel airport was killed in a crop dusting accident, he took over the management of the airport and operated it until 1980. He gave flight instruction, flew charters, pulled banners, was a flight examiner, and spent hours inspecting power lines for electric companies.
He could also be seen pumping gas, cutting grass, washing and maintaining the aircraft. He was a tireless worker, dedicated to keeping Laurel Airport and general aviation alive.
At the time of his death in 1980, John had accumulated over 35,000 flight hours.